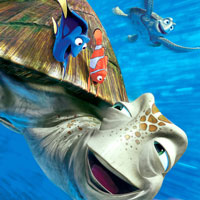 In addition to the "preview" on The Ellen Degeneres Show, Finding Nemo 3D is getting some publicity at the preview screenings of Beauty and the Beast 3D. A few minutes of the 3D footage were shown prior to the showing.

Though Finding Nemo wasn't originally staged for 3D viewing, I can't help but imagine it will be one of Pixar's most stunning 3D films with all of the depth and dimension of the under water world.