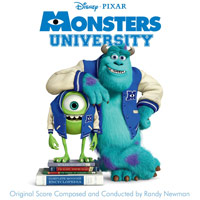 Amazon has posted the track list and a few vague details about the upcoming Monsters University Soundtrack. The score was written by Pixar favorite, Randy Newman. But one track is credited to two musicians formerly of the band Swedish House Mafia. The album is also available for pre-order from the page, and is listed for release on June 18th, 2013, just 3 days before the movie itself debuts.