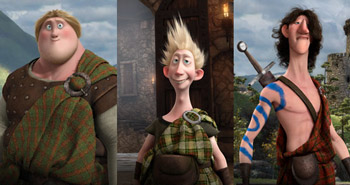 In an article posted Saturday, new characters from Pixar's next film, Brave, can seen for the first time besides passing glimpses from the trailer.

The article itself, however, is quite vague and frankly, inaccurate. While these images are undoubtedly legitimate, the only claim the author makes is that they come from a "card game." He also takes an inaccurate stab at the identity of some characters, claiming them to be younger, flashback versions of the three lords, while the trailer makes it pretty plain that they are actually the lords' sons. He has since added a statement to the article to address that inaccuracy.

More character images can be seen in the article at Bleeding Cool including the royal family, the three lords and their sons.