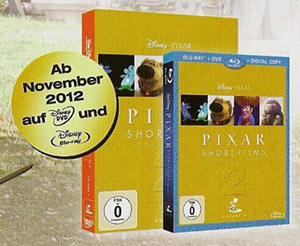 Ahead of any official announcement from Disney or Pixar, the German Pixar Blog has discovered a reference to the forthcoming second volume of Pixar Shorts to be released on DVD and Blu-ray. The ad appeared alongside another ad for the also unannounced Blu-ray for Brave. It is very typical for the Pixar summer film to be released on home video on the first Tuesday of November. These two will likely follow suit as the ad cites November specifically as the expected time of release.