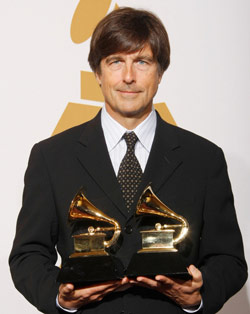 Thomas Newman is well known to Pixar fans as the composer behind the beautiful scores for Finding Nemo and WALL•E. Newman confirmed this week that he'll be adding a new Pixar film to his resume, Bob Peterson's The Good Dinosaur. The Good Dinosaur is Pixar's 2014 summer flick and is set to arrive in theaters on the 30th of May, 2014.

Thomas Newman is a well-regarded composer outside of the Pixar universe as well, having composed scores for other blockbusters like: Skyfall, The Iron Lady, The Help, The Adjustment Bureau, Cinderella Man, Road to Perdition, Pay It Forward, The Green Mile, The Shawshank Redemption and many more.