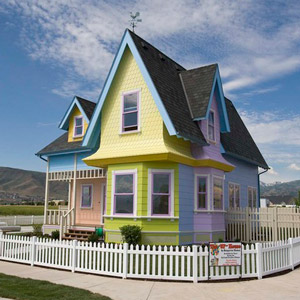 The Salt Lake Tribune reports that the UP replica house built in Herriman, Utah has been purchased by devout Pixar fans from California. Clinton and Lynette Hamblin were wanting to relocate their family to Utah anyway, and saw this as the perfect opportunity. When Lynette saw the retro sky-blue appliances in the kitchen, she was sold. The $400,000 price tag seemed like a steal compared to similar buys in California.

For Pixar fans who have yet to visit the UP house, it is still open to the public through December during daytime hours. And for those concerned with the integrity of the Pixar charm, the Hamblins have publicized their intent to keep it as is, with addition of their own furniture and Disney themed glass works collection.

It's comforting to know it will be left in good hands. Having had the chance to see it myself, I can attest to the care Bangerter Homes took to preserve the Pixar magic. They even hired actors to play Karl and Russell during the Salt Lake Parade of Homes, and handed out Grape Soda badges and balloons to visitors. The builder was also not hesitant to add that they are open to making the UP house plans available to more buyers, so your dreams of owning your own UP house are not lost forever.