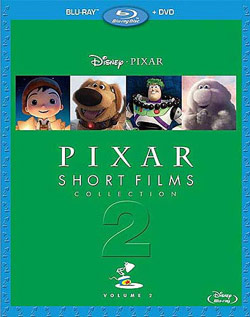 A few months ago, evidence arose out of Germany that the second volume of the Pixar Short Films Collection would be appearing this fall. There is now more proof in the form of Amazon pre-order pages for the collection both on blu-ray and on dvd.

The collection is expected to include all theatrical shorts from Presto through La Luna, and all of the other movie-themed shorts like the Toy Story Toons series.

You might, for good reason, wonder why you would want this collection if it only includes the short films made at Pixar since volume one was released, and you presumably have them in your collection already attached to the feature films. Well, in addition to the Pixar-made shorts, the collection will also include the original student films from Pete Docter, Andrew Stanton and John Lasseter including Nitemare, The Lady and the Lamp, Somewhere In The Arctic, A Story, Winter, Palm Springs and Next Door (not to mention that the Toy Story Toon Small Fry was not attached to any Pixar films).

Pixar Short Films Collection, Volume 2 will be available on home video alongside Brave on November 13th.