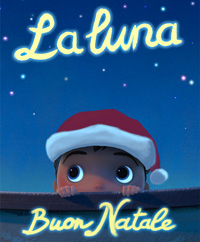 Enrico Casarosa, director of Pixar's short film La Luna, published a customized holiday greeting on behalf of him and the La Luna crew on his website's blog yesterday. As a tribute to the film's location, part of his greeting is in Italian. Because "la luna" means "the moon" in both Italian and Spanish, many have supposed that the film is set in a Spanish-speaking region. But the addition of "Buon Natale" to the greeting has made it clear that it is, in fact, based in Italy.

Buon Natale, Merry Christmas to you all from the La luna crew! I can't wait for you to see our little movie in the new year!