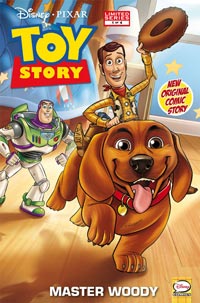 Marvel and Disney announced that they will be releasing a series of four new Toy Story comic books. The first will be released for sale in March 2012.

The official synopsis for the first comic book of the series reads: "Andy's new puppy, Buster, loves to play with toys — but if Woody, Buzz and the gang can't control the playful pooch, all that chewing and shaking will leave them in a world of hurt! Will our heroes make it through in one piece with batteries intact? Find out this March in TOY STORY #1!"

Marvel Editor in Chief, Axel Alonso said of the series, "Everyone loves Toy Story, so we're excited to team with our friends at Disney-Pixar to bring readers all new stories of our favorite characters from these blockbuster films."