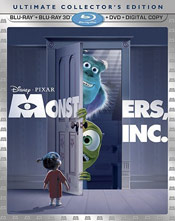 The 3D blu-ray re-release of Monsters, Inc. is now listed and available for pre-order on Amazon. It's listed as a 5-disc combo pack with a 3D blu-ray, blu-ray, DVD and Digital copy with the 5th disc presumably set aside for blu-ray special features. Cover art is shown, but no further details are given, including a release date.

The recent 3D re-release of Finding Nemo will be released as a 3D blu-ray combo pack on December 4th (alongside UP), just shy of three months from its theatrical release. With the Monsters, Inc. theatrical re-release set for the 19th of December, I think it's safe to assume we'll see the 3D blu-ray sometime around early to mid-March.